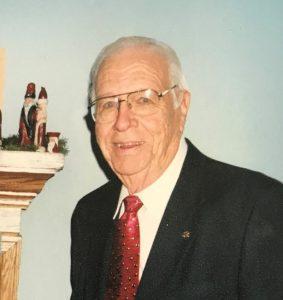 Jack Chalender of Estes Park, CO, formerly of Overland Park, KS died in Estes Park on September 1. Ralph Evan (Jack) Chalender was born August 7, 1925 in Wellsville, KS to Ralph and Sally Chalender. He graduated from high school in Wellsville and received his Bachelor of Science (Elementary Education), Master of Science (Guidance and Curriculum) and Doctorate (Administration and Curriculum) degrees from the University of Kansas. On June 12, 1953 he married Katherine (Kay) Wingert at the Wellsville Methodist Church. Jack was a lifelong educator beginning his teaching career at North Windy, a one-room school in rural Miami County, KS where he taught all eight grades. He furthered his career in Johnson County, Kansas where he taught at Overland Park and Prairie Schools before serving as a teacher, counselor and principal at Milburn Junior High School. In 1968 Jack became superintendent of the Valley View School District. From 1969 to 1983 he was employed by the Shawnee Mission School District serving in a variety of capacities including Assistant Superintendent for Instruction, Associate Superintendent for Elementary Education and as the area Superintendent for the North and Northwest areas. After his retirement from the Shawnee Mission School District, Jack enjoyed an encore career working in public relations and marketing for Mainstreet Credit Union. Jack and Kay spent many summers at their mountain cabin in Riverside and were summer members of the Allenspark Community Church. They moved to Estes Park as full-time residents in 2009. During his career Jack was active and held leadership positions in many civic organizations including the Credit Union of Johnson County (Mainstreet Credit Union), Fire Board District One-Johnson County, Shawnee Mission Chapter of American Red Cross, Johnson County Charter Commission, Johnson County Retired School Personnel, State Legislative Committee for Kansas Retired Teachers, Johnson County Mental Health Association, Johnson County Christmas Bureau, and Johnson County YMCA. He was a member of Village Presbyterian Church in Prairie Village, KS where he served as an elder. Jack received numerous honors including induction into the Kansas Teachers Hall of Fame in 1988. In 2002 he was recognized by the Kansas Senate for giving 40 years of his life as a teacher and for his many community contributions. He received the Patron Award from the Shawnee Mission Education Foundation in 2008. Jack had a tremendous influence on the lives of his students, colleagues, friends and family. He lived a life of service and always had time for others. He will be remembered for his wonderful sense of humor, positive attitude, patience, gratitude, compassion and ability to offer wise counsel when asked. He lived life to the fullest and enjoyed following KU basketball as well as the Kansas City Chiefs and Royals, playing bridge, fishing, camping, traveling and spending time with family and friends.

Jack brought his many talents to bear as he helped to shape a vision for our organization, joining forces with our other founding trustees to build JACF from the ground up. We remember Jack and appreciate and continue to benefit from his passion and drive today.

A memorial service will be held at the Allenspark Community Church in Allenspark, CO on Saturday, September 22nd at 2:00pm.

A second service will take place at the Village Presbyterian Church in Prairie Village, KS on Saturday, October 20th at 2:00pm.

In lieu of flowers, donations in Jack’s memory can be made to the John Austin Cheley Foundation along with Village Presbyterian Church and the Shawnee Mission Education Foundation (Jack Chalender Legacy Fund)

Condolences can be made here.