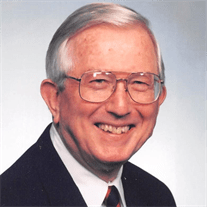 Homer Clark Evans, 89, of Prairie Village, KS, died June 9, 2017 after a short illness. He was born December 5, 1927 in Pittsburg, KS to Faye and Homer F. Evans and lived in the Kansas City area his whole life. He attended Ashland Grade School and Southeast High School. At Kansas University, he was a member of TKE and received degrees in Business/Industrial Management and an MBA.

Homer was a counselor (1947-51) at Cheley Camp in Estes Park, CO, leading hikes in the Rocky Mountain National Park and up Longs Peak ten times. He served in the US Army (1952-54) and was in the first test of the atomic cannon in Las Vegas. As a City Councilman in Leawood he was Chairman of Budget and Finance. In retirement, he tutored reading for eleven years at Literacy Kansas City and was named “Tutor of the Year”. In 1989 Homer helped found the John Austin Cheley Foundation, helping forge our identity and founding principles, and setting the stage for the future of our organization.

Homer spent his entire career with Hallmark Cards, Inc., retiring in 1992 after 38 years of service. A strong leader and innovator, he was a Hallmark corporate officer and served as the first President of the company’s Ambassador Brand. He also led Hallmark’s sales organization, the greeting card division and directed the company’s early entry into licensing. He is credited with the introduction of the popular Shoebox brand of humor cards.