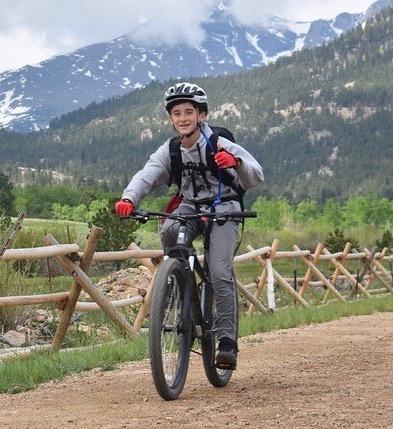 A Thousand Summers works with incredible kids around the country who, as a result of their time at camp, are making a difference in their communities. Will is a 9th grader at Boulder High School in Boulder, Colorado, who loves basketball, math, and hanging out with his friends. He competes in mock trial competitions and hopes to pursue future studies in statistics as applied to the sciences or possibly the sports industry.

This summer will be Will’s third summer in the BTE unit at Cheley Colorado Camps. His favorite camp activity is mountain biking, but he is also excited to try more backpacking this summer. More than anything else, Will is looking forward to getting back out into nature, away from technology, and reconnecting with his camp friends after two years of not being together.

“Camp helps you grow as a person by being able to talk about anything freely and also just being more adventurous, doing things you may not usually do, and pushing your comfort zone.” – Will, Cheley Colorado Camps, Boys Trails End Campership Recipient

During his time at camp, Will’s love of nature and his environmental awareness have grown. Climate change and global warming are issues of central concern to Will. This summer and early fall he watched forest fires ravage the hillsides above his hometown of Boulder but also destroy large sections of Rocky Mountain National Park, coming very close to BTE and the beautiful land he has come to know over the last few summers at camp.

Will combined those environmental concerns and experiences with the skills he learned at camp and designed an impactful Capstone Project this past fall. The Capstone Program, started in 2012, invites our returning campers, with their mentor’s support, to design and lead a service project during the school year in their local community. Through the Capstone Program, campers build upon the personal growth and development attained through their camp experiences and further develop leadership skills that can serve them now and in the future.

Will focused his Capstone Project on the “Get Out The Vote” campaign as a way to call attention to climate change and other issues of concern to him. When asked about why he chose the “Get Out the Vote” campaign, Will explained that his 5th grade teacher (Karen Halverson) encouraged her students to express their voices and that she had organized a march of her elementary students through the University of Colorado campus to encourage college students to register to vote. At 15, Will is not yet able to vote and so couldn’t make his own voice heard at the ballot box. As a result of the experiences with his 5th grade teacher and his growing environmental awareness enhanced by camp, Will knew that he could make a difference by talking to others and helping them realize that their vote matters.

“I just wanted to encourage people to vote no matter who they were voting for just to be able to express their voices in a time when everyone’s voice needs to be heard.”— Will

Will got involved with local grassroots efforts and encouraged people to get out and vote by personally writing and sending over 300 postcards, making phone calls through a local phone bank, leaving sticky notes on the front doors of people who lived in areas with lower voting percentages, and inviting friends and family to join him in a socially distanced “drive-by parade” encouraging people to make their voices heard at the ballot box. He recruited several friends to help him in his efforts and received great support from his Capstone mentor, Darren Kelly. 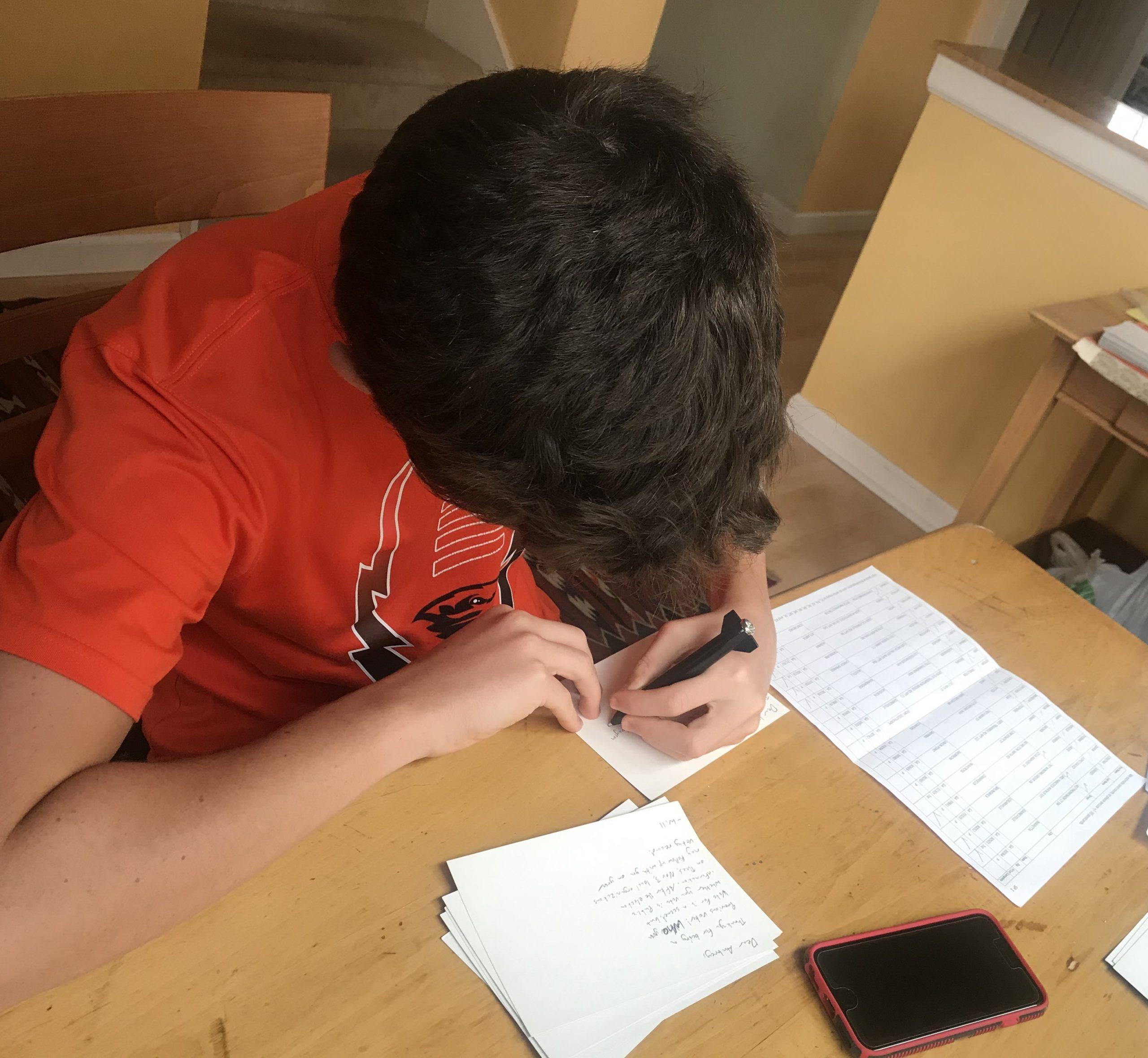 Will knew that not everyone he spoke with was going to actually vote or vote in the same way that he might if he were able to, but he learned a lot from the experience. Talking to complete strangers, especially about sensitive issues, was awkward at times, but he was able to build genuine conversations with people by first listening to and learning a little bit about them, respecting where they were coming from, and then sharing some things about himself—lessons that he learned in building friendships with new people at camp.

His conversations with people during his Capstone Project showed him that “you may not have the same views but you could still relate in a lot of ways in that we’re all human and all going through a crazy time that we have to get through together.”

Darren, Will’s mentor, shared that “for Will to call people out of the blue took a lot of guts and he got more comfortable with it over time. It definitely helped him grow and develop skills that he’s going to need for job interviews and things in the future.” 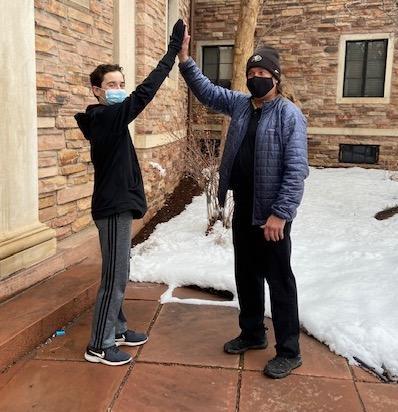 Darren has known Will since he was in Kindergarten and was his soccer coach from 1st-8th grade. He loves being a mentor for A Thousand Summers and has enjoyed watching Will benefit from the camp experience. According to Darren, “Will raved the first summer he went to camp and talked about all the experiences he had that he hadn’t tried before. It definitely broadened his horizons and he overcame challenges, going farther than he thought he could. He just beams when he talks about camp and his experiences there.”

Will’s mom, Madeleine, a former Cheley camper herself, attributes much of Will’s Capstone Project success to his time at camp. She has watched him learn how to navigate through difficult conversations and situations at camp, feel more comfortable around new people, and find his inner voice. She loves that camp constantly reinforces that “it’s a really good thing to be a good person.”

In regards to Will’s Capstone Project, Madeleine shared that “it was an unbelievable experience to watch the President in his inaugural speech thank all of the people who helped get out the vote. I said to Will, ‘that was you!’ It was extremely empowering, and Will felt really proud about that.”

In this challenging world we’re all living in with COVID and so many other social issues of concern, kids are having a hard time finding a sense of belonging and significance. They are struggling to feel as if they have much influence or control. Will wanted to do something to break out of that and make a difference. He was able to harness some positive energy out of a very strange and unprecedented time and do something that mattered.

As Will’s mom said, “I think the Capstone Project really helps kids to feel important and that their contributions matter. The satisfaction that I saw Will get out of it was pretty big.” Darren, Will’s mentor agrees. He said, “It is very rewarding to do something like this as a volunteer and then see how much the kids grow from it and how much they appreciate it.”

In the future, Will plans to get involved with the midterm election “Get Out The Vote” efforts in 2022 and he looks forward to 2024 when he will be old enough to vote and be involved on his college campus with encouraging other young people to make their voices heard at the ballot box.

All of us at A Thousand Summers are proud of Will and how he is using his voice and the lessons he learned at camp to make a positive difference in the world. He has a bright future ahead of him and we look forward to following his journey.

“A Thousand Summers is committed to empowering the young people we serve to be agents of change and create opportunities to do good in their communities. Will’s project is a great example of a young person following his passion, expressing his voice, and making a difference.” — Tim Lucas, Executive Director.